Last time 13 people got to take home a pair of dream shoes (or two pairs) that they designed! And now, it's almost that time again. We're embarking on round two of the "Great Shoe Experiment" --  http://www.mytangodiaries.com/2013/11/jorge-nel-mr-tango-shoes-coming-to.html.

Below are some of my color/material ideas for the next order of shoes from Mr. Tango Shoes! (www.mrtangoshoes.com) Tango, ballroom, salsa shoes for men and women - for social dancing, performance and practice.
What is your dream dance shoe? Do you like different designs for different seasons? I have to admit - I'm dying for some color. I keep getting variations of "black-and-something" - it's time for a shoe with (gasp) -- no black! .  (This is my favorite part - getting everyone's input on the shoe they'd like designed for them!) ﻿


And here are the swatches and options from Mr. Tango Shoes website. Please visit the website for all the options available and bigger, better pictures of shoe models that can be ordered. 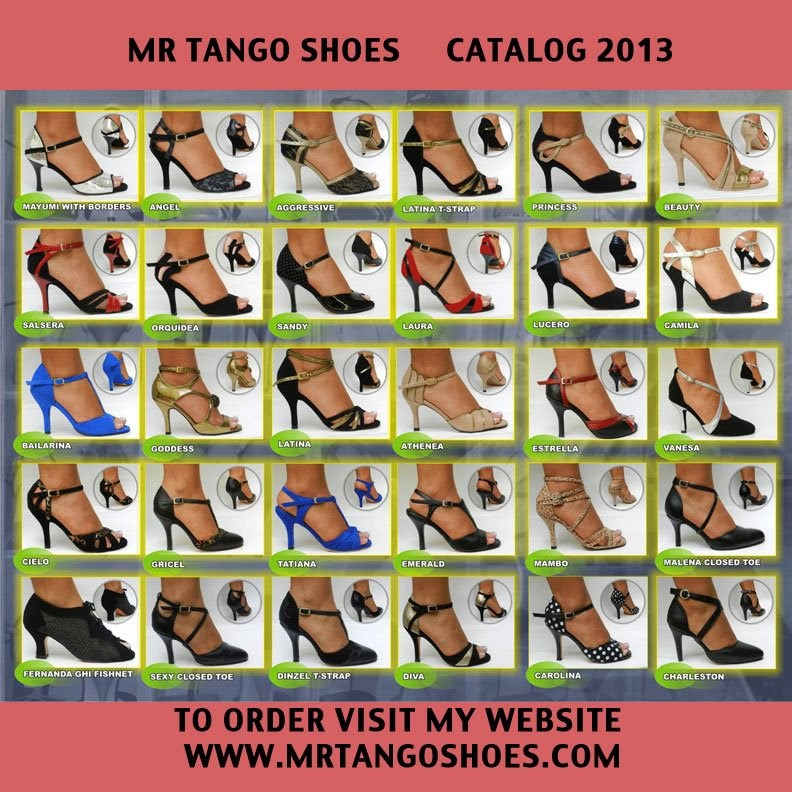 No comments:
Email ThisBlogThis!Share to TwitterShare to FacebookShare to Pinterest

Depression is a lying bastard.


Warning: This is not a tango-related post. Well, not directly. Kind of. I don't know, really.

It's been so long since I've updated, and I tell myself (and everyone else) it's because I'm so busy. "Busy" sounds so much better than "hiding". It also has the benefit of being mostly true.

I have 4 part-time jobs - ghostwriter/content producer, shoe sales and leather restoration, web traffic data analyst, and certified personal trainer for dancers. (According to one of my online Argentinian friends, the fact that I've got several jobs and am working in leather, makes me an honorary Argentinian. I think that's good, right? Does that come with a lifetime supply of empanadas?)  I'm also still a student working on my next certification. Pretty impressive, right? I can revel in a feeling complete bad-assery for about 15 minutes before it completely wears me out and the truth comes back in.

While it is true that I've got a lot going on, that's not actually the whole story. It might not even be the most important part of the story. (Btw, the thing I like doing the most is sitting on my ass in a room full of shoes, shining leather. Or recovering soles. Or making leather hair thingees out of suede scrap - that is also awesome. You know why? I don't have to shave my legs, or put on make-up, or try to think up normal sounding conversation. It might also be that I like the smell of leather and glue, but I don't think we should dwell on that.)

I love all of those roles - and I do find them very fulfilling. Even the data analyst job, which probably speaks to my less desirable OCD qualities. But if I'm honest, I'm really trying desperately hard to stay busy. I don't need to have 4 jobs - only one of them is actually paying any bills. I just want very much to keep moving. To feel some forward momentum. Busy-ness fills the dark, scary gaps for a little while. Because if I stop to look around, if I stop treading water  . . . I just sink. I sink so quickly.

I don't know if it's the long, unusually cold winter (and then warm weather, and then cold weather, and then warm weather again *sigh* - which makes me think of this cartoon) or the job change, or just a combination of everything. I'm in a bad place. Unfortunately, that place has gotten so familiar, and so perversely comfortable, it's very hard get out. If you've never been here, can you know how absurdly easy it is to stay down? Down starts to feel safe. How does that happen? Logically, I know how it happens. Because depression lies to you and tells you it's better to stay down. Outside is scary and makes you vulnerable. Better to stay inside where you're still vulnerable, but no one knows it. As the Bloggess so accurately summed it up, "Depression is a lying bastard."

So that's what I'm trying to write about.

This was supposed to be an attempt at an explanation to those who've been asking why I'm not out much anymore. The explanation feels so weak. I'm running away from the things that would almost certainly help me (dancing, friends, socializing) because those things absolutely paralyze me lately. Not all the time - just often enough to keep me from wanting to try. I do venture out occasionally, reach out to friends - especially those who have had to get used to this kind of crap from me. It's hard on them, and knowing that makes me retreat a little more. "I'm sorry" escapes my lips more often than "hello".

I'm not dancing much because right now dancing is physically and emotionally incredibly hard. I have no stamina. Because my spirit hurts, my body hurts. The autoimmune disease that I thought I had beat, seems to have taken residence again. Or maybe it happened the other way around. I'm never really sure - chicken or egg? Depression first or pain first? I'm battling constant nuisance infections, aches, asthma attacks. I'm back where I was 6 years ago - fighting for breath, fighting for energy. I feel like I'm walking shoulder deep in water. And what I would give to be able to sleep through the night. Instead my night looks more like this. Seriously, clowns scare the holy hell out of me. I blame Poltergeist.

I'm dancing badly. I feel rough, even to myself. Dancing creates that usually so desirable quiet space, but right now that's what I'm trying, for better or worse, to avoid. I don't want to be in someone's arms when the sinking starts. It really can be that fast. Before one tanda is over, I can go from peaceful, almost blissful, to searching frantically for exit signs. It's crushing, my breath catches in my throat and the air evaporates from the room. Panic replaces peace. Tears well up in my eyes. Apologies fall from my mouth out of habit. And then I'm out the door - to the bathroom, outside - somewhere with air. I can fight it off for a little while, sometimes a couple of tandas in a row. I've made it through my own practica twice - 2 hours each time, once (at my Mr. Tango Shoes Trunk Show) because I didn't dance the entire time.


Most milongas/practicas are just too many people for me. Too close. Dancing often leaves me abraded and raw. Often I dance with only a few people, not because I don't want to dance with other people, but because I don't know how many leaders would respond if I don't get away fast enough when things go south. If I don't keep it together.

But I'm in business now. In business for myself - so I have to hold it together. At least for a few hours at a time. I'm usually so exhausted by the end of a practica or milonga, that I go home and collapse. I managed two practicas in one day last week and was almost manic I was so proud of myself. Then I spent the next two days sick and sore. (And pondering questionable decor purchases. I didn't buy it. But I thought about it really, really hard.)

The upside, well not really upside . . .  amusing side? Entertaining side? My humor is becoming even less appropriate than usual. Which of course also worries me a little. What few filters I had on my mouth seem to have gone missing. Lots of thoughts that should have stayed in my brain accidentally make it out of my mouth. I end up having a lot of conversations that later on I think might have sounded like this.  (By the way, I almost ordered greeting cards with that on it. I couldn't stop laughing at it. Not the happy kind of laughing, but the maniacal, hysterical sort of laughing that makes my husband worried and suspicious. I didn't get the cards, for the record. But I think they're still in my Zazzle cart.)

So, even though it's far too late for the short story of all of this, the summary is - I'll come out and play as soon as I can. As often as I can. (When I haven't given myself mild food poisoning with my own cooking, which is why I'm writing this and not dancing.)

I'm not ok, but I will be. If I say weird shit, you can take comfort in the fact that that's always been going on in my brain, I just kept it quieter. I guess that's not very comforting. Never mind.

Meanwhile, I'm making leather crap in my office, playing "which of these is not like the others" with data, and telling myself this. If you have been in this place, you might want to get this pin too. It's a good reminder.

Thanks for reading this far. For reference, if you ever get this bad off, it's really helpful to get an animal hat like the one I'm sporting below. I don't know why. It just is. That's a lion on my head.  Hear me roar. :) 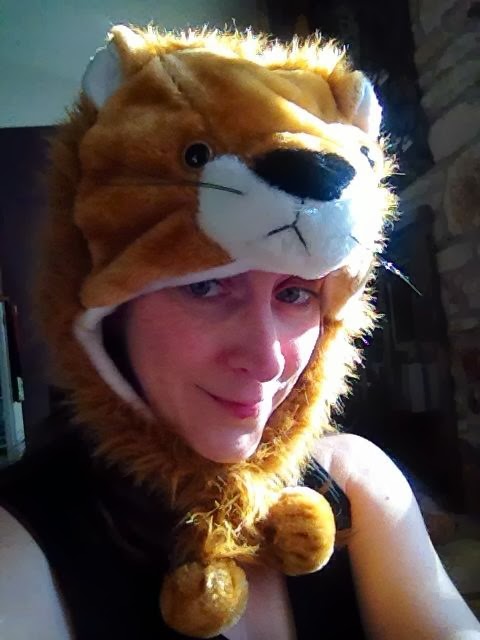