More from Un tal Gavito, back sacadas, and footsies 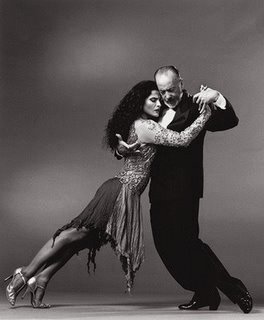 So far I am slightly less pleased with Disc 2 of Un tal Gavito. The moves and sequences are larger in this series, and open the embrace frequently. That said, I believe this is another example of something I've noticed about many (frequently Argentine, though not always) teachers, where a sequence or step is taught with the purpose demonstrating and refining a technique rather than for the pattern itself. Far more than the previous DVD, the movements in this part of the program are focused on maintaining balance and control of one's axis (with the exception of the very first sequence, salida in carpa (or deep apilado or lean, for which Gavito is famous).

Side Note: I was very happy that he explained and demonstrated salida in carpa (led from the back ocho) because I find it so beautiful and intriguing - exemplifying, for me anyway, the power and beauty of surrendering completely to the lead. Of course the extreme depth of the position makes it inappropriate for the social floor as well - close embrace or no.

The steps Gavito and Duran teach could be done smaller and within the line of dance, but not easily - and they aren't demonstrated that way. They are, however, beautiful, highly maneuverable sequences that can built upon one another, or even broken down further. This DVD in particular is best for dancers with more experience in adapting steps to floor conditions.

In Disc 2, Gavito and Duran demonstrate a fairly dramatic back sacada. I must admit as soon as I saw the topic title, I bristled. This is one of my least favorite steps as I've found:

1.) I'm frequently not in the place or position I should be in for it to work smoothly (frequently that's my fault), and,
2.) my partner has no idea that I'm not in the right position for it (often not my fault).

One of the worst injuries I've sustained in tango was the result of back sacada gone wrong. I had a bruised knot on the side of my knee for almost two weeks from it. The problem was simply that I wasn't waiting just that tiny hesitation to create the illusion of the displacement. I essentially moved back too quickly. I didn't know to wait. I was pretty unfamiliar with back sacadas and they hadn't been taught in my classes, (even front sacadas were a bit new at the time). The idea, as I've since been taught, with the sacada, or illusion of displacement, is that the follower needs to wait (almost more of a hesitation than a "wait") in the place that she's been led with her free leg relaxed but ready, and not step, which would prevent the sacada.
For beginner followers it's often a constant battle to wait and not move ahead to the next anticipated step or position. Gavito has an effective way to make sure his follower is where she needs to be and ready for the sacada, before leading it. I hope I can describe it accurately - I wasn't able to find a YouTube video of something similar.

He simply walks with her (in this case, outside on her right) and before he moves his back (left) foot forward, he crosses it behind him, moving it toward her and just brushes her foot (he turns slightly for this into almost, but not quite, a low boleo to his right, behind him) - not displacing her foot, just touching it, and then continuing his step. In the video, he does this 2-3 times before leading the back sacada.

This lets him know where she is, and if she's waiting for him, or taking her step ahead of his. This also lets his follower know that a sacada may be coming - or at least that she needs to keep her foot where it's led and wait until he leads her to take the step backward. If she consistently pulls ahead and doesn't wait, the leader knows not to go ahead with the back sacada. It reassures the leader and gives a little warning to the follower. Such a simple thing that would have likely prevented my injury.

Leading from the Bottom Up

And before I get the flurry of emails saying that if the follower would just wait and not anticipate the step, everything would be ducky, let me say that in theory, that's true. In reality, there are any number of factors that contribute to why a follower may not be where a leader thinks she ought to be - not just that she's anticipating or not following properly. It's rarely as simple as "he didn't lead it right" or "she didn't follow it right" - rather, it's been my experience that it's a combination of miscommunication on both parts, quick (or even unintentional) reactions to floor conditions etc. I really believe, as unfair as it might sound, it is the leader's job to verify that his partner is where she "should be" and not assume that she is - then blame the consequences of misjudgement solely on her.

Note to leaders: This falls under what I've called in the past, leading from the bottom up. When leaders take time to make sure (or Dial In ) that the follower is able to follow what he's leading. This requires gauging her skill and comfort, building slowly, and listening to her body and her responses - without judgment (preferably of her or yourself).

Another note about almost all of the sequences and movements I've seen so far on these DVDs - Gavito and Duran are in remarkably frequent contact with each other's feet. They constantly brush and caress each other's feet - particularly before more dramatic steps. More and more I'm noticing how this frequent contact is not only essential for making the dance even more musical, precise and expressive - but it also, when done lightly and softly, makes the dance feel comforting, reassuring, connected. On a more practical note, it makes the dance slightly smaller/ tighter.

The trick, particularly with beginner and early-intermediate dancers, is overcoming the almost phobic response of trying to avoid each other's feet for fear of stomping on each other. I'm still working on that - it's tough, particularly with leaders I don't have much experience with yet.

So, back sacadas still won't be my favorite of steps, but at least now I have a better understand of the mechanics - and potentially know how to "listen" for my leader giving me clues as to what's coming. And I have even more incentive to look for footsie opportunities
Email ThisBlogThis!Share to TwitterShare to FacebookShare to Pinterest

Ruben calls the frequent touching of each other's feet, a "kiss" of the shoe. A good leader leads with everything--his chest, his arms, his hands, his feet, his intention. The woman feels secure that she knows exactly what he wants her to do.

I think it's best with Gavito's videos to take what speaks to you and don't worry about the rest. What is so valuable is that he expresses the "tango" with every move--old and portly as he was. The precise steps are just extras.

Tangocherie - I love that - the "kiss" of the shoe. So sweet - just perfect.

And I think your advice, "take what speaks to you" applies to so many things in learning tango - and life generally. We can't store or use all of it. Thank you, as always, for your wonderful comments!