“Great minds discuss ideas. Average minds discuss events. Small minds discuss people.”
― Eleanor Roosevelt
“Isn't it kind of silly to think that tearing someone else down builds you up?”
― Sean Covey, The 7 Habits Of Highly Effective Teens
I posted this one Facebook in response to a link share, but I think it needs to go here on the blog as well.

The original link on Facebook was to Paul Yang's post on "In Search of Tango", titled, "Why People Quit Tango."

It was shared by several people, but Shellie Hubbard's comment summed it up beautifully:

"Very short and to the point. A good read for all, but I want to take a moment to address a very small, yet very destructive, segment of our tango society.

So, to you select ladies... Enough with the, "I didn't feel your lead" followed by instruction on the floor garbage. Also, stop leaving the new men to twist on their own while you dance exclusively with the more experienced leads. If you as a lady aren't bringing a lead to the socials, then good God, stop driving away the ones who come on their own or with others. (And stop complaining about how there are "no men." The few in attendance HEAR YOU and wonder why you don't consider them adequate.) If you think I am talking about you, then I probably am! Wake up, honey. You are part of the problem."

Saturday night I heard a woman rant several times about the quality of the leaders in attendance at the milonga. These weren't floorcraft observations of collisions or that sort of thing. Her comments were harsh, bordering on cruel - and loud enough for me to hear as I passed by with my partner on the ronda.

Later I heard from one of the leaders who was the subject of her rant. He, and others around him, were also affected by her words. So I wasn't the only one who'd heard her.

I am guilty of making comments when I see collisions and rude behavior and the pista. Mostly these are directed at dancers who've been dancing long enough to know far better than they're behaving. But even those comments, as justified as they feel at the time, don't help anything. They don't address the behavior to the individual(s) responsible and can contribute to a sour mood in the milonga. I've been trying more and more to keep my mouth shut and my mind open.

But comments like what I heard Saturday night go even beyond critical observation. I remember vividly what it was like to be the least experienced dancer in the room - repeatedly. Or when I was more experienced, having a rough night and just dancing badly. A couple of times comments directed to me, or about me within earshot, were enough for me to reconsider continuing to dance. I stayed with it because more people encouraged me than discouraged me.

We all have opinions all the time. We're human and I'm no Mother Teresa. (If I had a dime for every floorcraft related *facepalm* I've done at the milonga, I'd have a lot more tango shoes . . . ) But for God's sakes keep poisonous judgments to yourself. Beginner leaders can become great leaders, and they remember those comments - and the women who said them. The same is true for followers who remember, often with deep embarrassment, the men who chided and instructed them in the middle of the dance floor.

A little a kindness goes a very long way.
15 comments:
Email ThisBlogThis!Share to TwitterShare to FacebookShare to Pinterest 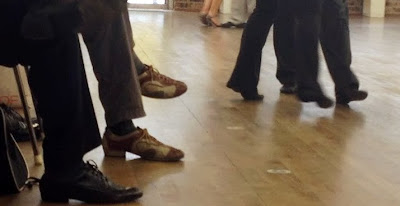 Can one change to your posture affect every part of your dance? Absolutely! How one simple adjustment can improve comfort, balance, embrace and even your floorcraft. This is truly one of the easiest ways to make your dance look and feel effortless.

Have you had previous injuries to your ankles or knees? Do your knees feel sore after dancing the night before? Learn how this popular (and slightly silly) soccer exercise can increase your stability and the smoothness of your walk, all while protecting your feet, ankles and knees while dancing.

Are you getting feedback like, "Your walk is too bouncy", "You're dropping your hip", "You're breaking at the waist"? Learn the exercise that can smooth out your walk and improve your balance.
No comments:
Email ThisBlogThis!Share to TwitterShare to FacebookShare to Pinterest
Newer Posts Older Posts Home
Subscribe to: Posts (Atom)