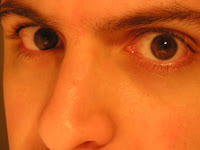 This has been coming up more and more as dancers (online and off) have been discussing the merits (and pitfalls) of using the cabeceo at milongas.
Here's one example of what often happens...
As soon as the cortina starts, especially if the milonga is very busy, leaders scramble to find their first choice next partners in scattering dancers. Because people are seated somewhat haphazardly and there's no single point of exit from the pista - visibility is tricky, even if the lights are brighter (which is rare). So gentlemen have little choice but to walk up to the table where their intended follower is sitting and simply ask her. Knowing that the milonga is usually set up poorly for the cabeceo, the follower accepts invitations that way, rather than appearing rude and declining an invitation, and "punishing" the leader for asking in the only way he had the opportunity to.
So we usually accept the invitation.
There are times when it would be even more prudent to turn down an invitation that way - such as when repeated cabeceos were *not* returned and then the leader decides to come up directly in front of the follower and ask her to dance. This has happened recently to me with a leader who swings me around like a rag doll when I dance with him and nearly pulls my arm out of its socket to do his big finale tango poses. I avoided his cabeceo for three cortinas - even getting up and leaving my table to avoid it. Finally he just appeared in front of me and asked me.
I should have declined but I didn't. I rewarded the behavior and got a sore shoulder for the trouble. Simply because I thought it would be more rude (and obvious) to turn him down. So in a way, I was punishing the nice gentlemen who might have been trying to make use of the cabeceo by getting up and dancing with a man who had, by the standards of milonga codigos, been rude. I also, by accepting his invitation, rewarded his style of dancing even though it's frequently inappropriate for the social dance floor. One leader said it sends a pretty clear message when they see that happen: Nice guys finish last (or at least sit out more tandas).
So in these situations where at least half of the leaders can't or don't use the cabeceo - is there any way to reward, and thereby encourage, the leaders who do, at least when they're able to? Of course we can be observant and available for the leaders that use it, but usually by the time we think someone *might* be trying to cabeceo us, another leader has already approached and asked.
Email ThisBlogThis!Share to TwitterShare to FacebookShare to Pinterest

I think its better to be cruel than kind, yet sometimes leaders need time to improve, I know several leaders, who followers have reject, then get better, then it is the follower who is losing out on a nice dance. I guess it comes down to personal opinion and individual circumstances. :)

Make it a habit to say "yes" only to your first choice partners in milongas (on an occasional night, first and second). I am afraid there is no other way.
And never, ever accept invitations from rude, hurtful people. Saying yes to them bears another consequence you did not mention in your post. Those people are not popular, and if you give in once, they will bother you more often, become more persistent (rude, in fact) with you in the future.

Thanks, Mari, for raising this. Long term, I think the only solution is to cultivate your preferred leaders. Eventually, others who are dissimilar to them will see that, and will more likely self-select not to approach you.

Some ladies also try to stay in the same place as much as possible when not dancing, so leaders who they like to dance with know when and how to get in their line of sight in a busy milonga (especially if there are no cortinas!)

Sometimes you can plan ahead. If the music isn't right, you can ask to dance "the next milonga/ vals". When the music changes, you both know that you will be looking for each other. This can work both ways, for men or women.

This is one of those eternal questions. Because we are not in BA, the cabeceo is not a universal method for getting dances. Which is why it is easier to turn down someone who comes to the table down there, but almost impossible to do anywhere else. I'm afraid that it will always be so, unless, for some reason, the cabeceo is adopted everywhere.

A novice leader here: I have been following and am very interested in the discussion about cabeceos. And, case in point, at least three times tonight I tried to attract a woman's attention through "prolonged" attempts at eye contact only to give up because the woman in question was chatting up her female friend and not looking for any subtle signals from across the room.
My point being that both we leaders and you followers need to be educated to the custom and tradition of the cabeceo as a wonderful part of this dance and culture we are learning in order to have it work in the way it should.

It's been quite some time since I have been on the tango floor, but one thing that I have never had the compunction to do is just blatantly throw someone around who accepts an invitation. What better way to make someone unhappy? And yeah, if someone won't return eye contact with me, going up and asking her is probably gonna make the tanda, and the night, worse.

It's supposed to be fun, right?

Also, when leaders throw their dance partners around, it makes me feel embarassed. Seriously, the cliche is right; It takes two to tango, and not one to throw another around. If they want to do that, maybe try Judo?

If I may, James, not returning a glance is the cabeceo way of saying "I'm doing something else right now". People actively looking to dance will do just that, look around.

I think there is an easy solution. Tell the leader that in the future you will only accept cabeceos from him and no direct requests. Now he has been warned. Even better, ask him if he can wait for the the third song so you can rest. THEN tell him. It is not better to be cruel than kind. It is better to be clever and kind.

If the question was, do you want to have sex with me?, you would have no problem saying no to him. If a man invites you do dance, you have a choice as well. A simple answer of no thank you is not rude, it is honest. You had enough experience with him to know what was in store. Physical abuse on the dance floor happens because women do not know how to say NO!

@Dave - we've been missing you at the milongas. Don't be a stranger. :-)
@TheTangoTherapist - this advice from the leader who had to cabeceo me via mirror because I was talking to someone... ;-) Duly noted though - I am making that effort.
@JanTango - recent experiences have proven you 100% right.