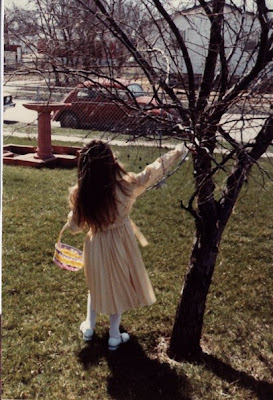 For the first 10 or so months in my tango life, I had the unshakable, sometimes paralyzing, feeling that I was really only impersonating the woman I wanted to people to see. I was playing dress up in a real dancer's clothes. I was deeply afraid of being found out. Looking at myself in the mirror constantly reminded me I was trying to hide. I wanted so very much for others to see this person I'd made up, a confident, graceful dancer - not the woman I saw reflected back at me.
The person I saw in the mirror was, and occasionally still is, caught in the picture of a stinging childhood epithet, "ugly, little geek." Whenever I looked in the mirror at my posture, or my walk, I'd ask myself who I thought I was kidding. What did I want to accomplish so badly? The phrase kept repeating in my head as I tried to look feminine, graceful and strong. Sometimes, though rarely now, it's still in there whispering in my ear . . .
Ugly.
Little.
Geek.
It was meant to be a playful tease, not serious at all. It was the sort of thing children, particularly boys I think, tend to say to one another. Playful insults were just that - playful. But I was a girl. And this had come from my father, from as far back as I could remember. For him it was a type of endearment like, "it's just you and me kiddo." He would come home from work, give me a hug and say, "How are ya, my ugly little geek?" I never felt that he truly believed that those words applied to me, as such. We had a lot of time where it was just him and me and he fostered a bit of an "us against the world" sort of attitude. My childhood was divided between my grandparents' house and my father's house (through his 3 marriages). We both felt at times like we were misfits. A little misunderstood. A little bit adrift in the world. A bit too smart, and bit too odd, to fit in.

I knew what he meant. It just didn't help.
I knew it was only a nickname and I would even laugh when he said it. I knew my father didn't think I was ugly. But I never felt that he thought I was pretty either. Until I got past my teens, I was underweight, frequently sick, exceedingly clumsy. Growing up, I mainly just tried to blend in. I believed that not being noticed was probably the best I could hope for. So I tried very hard to strike a balance between not wanting to stand out, and trying desperately to develop some grace, mainly in the form of dance classes in school. No matter how competent I became in my dancing, I never equated that competence with feeling graceful personally. I did get less clumsy. And I got stronger. I could "put on" gracefulness for the class, or for the performance - but it didn't really feel like me. It was a costume.
When I started tango, it was much the same for a long time. I still felt unattractive, incapable, ungainly. Over time, though I'm not sure exactly when, I stopped feeling like I was wearing a costume. The feeling I enjoyed dancing in the milongas started staying with me longer and longer. My coworkers told me that I walked differently, that I seemed like a different (more relaxed, more comfortable) person. I was starting to feel moments of grace and beauty at those times when I was trying least to "be" beautiful - mostly when I was in the moment of connecting, of dancing, of relaxing deeply into myself and my surroundings. I was traveling fully in my own skin - not trying to camouflage myself into the background.

I started to face myself in the mirror. My ideas of what the requirements were for being beautiful changed. I remember seeing a very advanced tango dancer at the end of a milonga laughing about a hem that had come loose at the bottom of her dress. She sat on a bench with her friend giggling over the hem, the new hole in her stockings, and with her hair down and falling a little bit over her face, she was stunningly beautiful. Radiant, almost serene, and yet laughing from the core of her body. At the end of most milongas, I can look around at the other followers who had made it to the end, and we frequently look a sight. Hair falling out of clips, matted to our foreheads, make-up mostly gone, stockings laddered, blissfully exhausted and lovely. I see those moments a lot in so many dancers, in so many milongas.
So maybe I've finally traded in my old moniker for one that really describes me.

Congratulations, Mari, on the caterpillar to butterfly transition. You probably actually made it a long time ago, but it can take time for people to notice these things in themselves. Revel in your new moniker :-)

Oh Mari,
If only our parents knew how their words would affect us they might have thought twice about it. Which is why I have always told my daughter how beautiful she is.
I am beginning to appreciate the beauty of women in various shapes and sizes. Most of our beauty comes from within shining outward. I know that dancing has helped with my confidence and I walk differently because of it. It is like having a little secret, knowing that I can do something that others can't. It might sound a bit smug, but I do keep it to myself and if it helps me all the better.
Once we do not care about what others think, then we can relax more and let out our true selves.
You are beautiful Mari, and you don't need Tango for that, it just might be what you need in order to find what was there all along. :)

BUT I today find it very straining on the eyes and inverting the colours by highlighting did not help.

Mark and londontango - thank you so much for your comments. I'm finding quite a few people have had similar journeys in, and maybe because of, tango. I think if I had saved my money on self help books, I could have a lot more tango shoes right now. ;P

Peter - I'm not sure how long it's been since you read my blog, but I haven't changed the color scheme in awhile - so I'm not sure if the problem is with the colors or the fonts. I asked a few experts how to remedy the problem and took their suggestions. I changed the font to a more readable Verdana, and increased the contrast between the background and the text. Let me know if that helps. If it's still hard, let me know what's specifically making it difficult so I can address it. I prefer not to use a white or very light background with black text because it tends to cause eye strain for people, like me, who tend to spend too much time looking at computer monitors. :)

I read your blog since pretty early, but mostly in bulks - thus then I spend some time with it.

I think the problem varies with daylight / artificial light.
For me the biggest problem was the pale light blue font and the contrast to the background.

Yes, for me it looks better now.