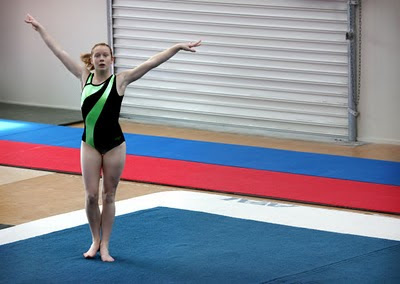 When I was in middle school I decided to take gymnastics. I have no idea, even to this day, what possessed me. It was, as the kids say, and epic fail. I was terrible at it. My balance was always bad. I had little-to-no natural grace. I seemed to run and jump about as if I were playing dress-up in someone else's body for the day. I could never get my limbs to do what I wanted them to do, when I wanted them to do it. As painful, and occasionally absurdly ridiculous, as that experience was, I managed to take away two lessons from my year in gymnastics:

The first lesson is pretty self-explanatory - and it has always paid off well for me.

Sticking the end, as my coach constantly reminded me, meant ending my routine resting in a balanced, stable position. If the routine was set to music, it was also a way of respecting and acknowledging the music. It meant learning precisely how much momentum I would need to get to where I was ending - and no more. It meant being in control of my body - not just hurtling myself to the spot where I stopped. For my coach, it was the epitome of grace and precision. It was a statement in itself.

That second lesson came back to me when I started letting myself really feel the music. Some music in the milongas was familiar, but much of it was not. The more I learned, the better I could move my body with true intension, to the music. When I watched other dancers who "stuck the end" of songs, I was struck by the grace of it - and how much seemed to be required to do it. I would not only have to really learn the music, but be in control of my body while I was being led by someone else. A lot of factors to contend with when one can barely manage a molinete.

NOTE: "Sticking the end" is not synonymous with ending in a "tango pose". I find those a bit silly. They're fun for playing at in practicas ("You be Gavito, and I'll be Marcela Duran, okay?" Yeah, I love that game. So sue me.), but not something I'm comfortable with in a milonga.

The feeling I like best is simply an acknowledgment of the music and ending in a balanced, comfortable position rather than being caught off guard mid-ocho when the music stops. Daniela Arcuri made a point of saying several times that marking the end of the song, like some adornments and embellishments, need not be visible to anyone outside the couple dancing. Although I heard that months ago, I didn't truly know or appreciate it until quite recently.

I admit there is a part of me that finds being able to mark the end of the song in some visible way a little too gratifying - especially when the music is quite challenging. It's a bit like trying to prove how well I know the music, when there's no one I need to prove that to. Once I start down that path, I begin dancing for the tables, and that's not where I want to be in this dance. Every so often I have to remind myself about what my priorities are. Sticking the end is really for me - for my relationship to the music.

A few weeks ago, I recognized something in the dance with a couple of my partners that perhaps had always been there - but I just hadn't appreciated. I still wonder, have I been missing it all this time?

The last song of the tanda was ending. We were gaining momentum in that build-up phrase that comes before the chan-chan. It was Pugliese, so the last phrase was long, and the chan-chan coming was soft and slow. We came to rest on the first chan - and as the last note played, my leader gathered me to him, closed his eyes, smiled against my temple and sighed - marking the end of the song in gestures no one else would see.

A gift for me, not the tables.

Thought you might enjoy this rhythmic gymnastic routine done to Gotan. She "sticks the end" pretty well.
http://www.youtube.com/watch?v=HNnLFQ9dRF4&feature=BF&playnext=1&list=QL

The truth is if you have a great salida and you "stick the end," the middle pretty much takes care of itself.

Cherie - couldn't have said it better.