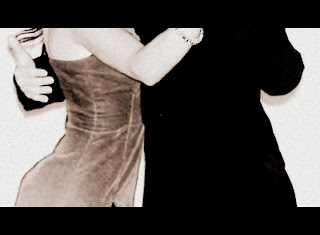 Another post in my "Four Agreements" series - though I am taking them out of order. (Because, if I try to write in order of the Four Agreements book, instead of the order in my brain, it will never get done.)


"Find the courage to ask questions and to express what you really want. Communicate with others as clearly as you can to avoid misunderstandings, sadness and drama. With just this one agreement, you can completely transform your life."   Don Miguel Angel Ruiz


Assumptions about Professional/Competitive/Performing Dancers
(fill in the descriptor of your choice - I've heard these assumptions applied to all three.)

Note: I didn't say these assumptions publicly before the event detailed below, and for that I am greatly relieved. The crow that I find myself eating now is uncomfortable enough.

Somewhere along the journey of my dancing life, I picked up the assumption that professional dancers, once they choose to devote energy to performing, touring or in particular competing in Argentine tango, somehow lose some of the soul of social dancing. As if to do one was to sacrifice the other. Experience bore out some of that assumption as I watched many visiting teachers come to the milongas and teach on the social dance floor, exhibit an incredible lack of floorcraft and social graces, and then proceed to sit on the sidelines and criticize local dancers. Their classes were often filled with patterns and steps that would be impossible, or at least very unwise, to use in the milonga.

Oops, there I go again, looking for reinforcement of my assumption . . .  The problem with an assumption is that very soon we start to see only the evidence that reaffirms our belief. The belief then becomes a fact and a lens through which we see situations.

There were plenty of exceptions coming through Austin of course - Javier Rochwarger, Murat and Michelle Erdemsel, Oliver Kolker and Silvina Valz among others, who do emphasize technique for the social dance floor.

When organizers and teachers Juan Carlos and Alicia Suarez brought professional dancers (Diego Benavidez and Natasha Agudelo, Ramada Salieri and Yumiko Krupenina, Roxana and Fabian Belmonte), all of whom were world class tango competitors, to Austin for their Second Annual Day of Tango event, I had very mixed feelings. I love this event so much but, I hate to admit it now, I was disappointed that they weren't bringing people who were more widely known for their social dancing instead of for competition. (Which in itself is problematic - if one only engages in social dancing, how would anyone know about them? And well known by whom? Me?) I had already formed an opinion of their teaching and personalities based on that one fact - that they had been champion tango competitors.

I should have trusted their judgment more.

Saturday night at Esquina tango, during the first milonga of the Day of Tango festival, I saw two of the couples in action. Esquina is an increasingly tight space to dance as our community grows, and the floorcraft can be iffy. It was even a bit of a challenge for some of our dancers who dance there all the time.

I think I was just sitting and waiting for one of the visiting followers to execute some high boleos or for a couple to stop the line of dance to do some fancy stationary move. That would have validated my assumption, after all. Instead I saw them dance respectfully, gracefully - even quite conservatively in respect for the space. Frankly, they were gorgeous - incredible examples of compact efficiency and elegance of movement. I was mesmerized by their ability to be so responsive to the dancers around them, and still express the music so beautifully.

At one point I just watched Yumiko Krupenina's feet while she and Ramada Salieri circled around the room. Yumiko had the most precise, controlled, beautiful footwork I remember seeing in a very long time. Nothing overdone, nothing flashy - everything completely appropriate to the space and the music. Next I watched Diego Benavidez and Natasha Agudelo as they moved calmly and smoothly around the pista. No flash, no kicking - just natural, effortless (appearing) movements in  harmony with the music.


I had been very wrong.

I was lucky that my partner and I had enough time to take a lesson with Diego and Natasha before they left and our first impression had been correct - they were consummate social dancers. Our lesson had no figures, no patterns, no steps - posture and technique only. We weren't the only ones to make that observation. They focused on the fundamentals and we had a fantastic lesson.

So there you have it - the lesson I seem to have to learn again and again. Don't make assumptions.

(And one last note to Juan Carlos and Alicia - thank you for an amazing event.)
Email ThisBlogThis!Share to TwitterShare to FacebookShare to Pinterest

Not sure you should be harsh on yourself, Infinitetango! Past experience over some years doesn't favour 'dance teachers' who are champions. & it's a pleasure to be proved wrong, too!

I've noticed a similar change in the teachers visiting London. It's as if the penny's finally dropped: we dance in milongas, not on stage, so we need classes that help us to dance in milongas, and we need teachers who are at ease dancing in milongas, too. I watched videos of the couple you mention: first a 'performance' which is very exaggerated, and then a performance in Salon Canning, which is a much calmer dance, so it's easy to see that they can dance to the level required in the situation. I hope we see more couples like them who can give us what we really need!