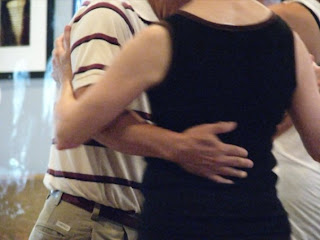 I finally braved it and took two workshops/classes from Silvina and Oliver while they were here in Austin. I'm still trying to absorb everything. Overall, I really enjoyed the classes and I'm continually finding ways to apply what I've learned.

Their approach to structure (which I've written a bit about in response to other posts on Tango Connections) is invaluable. They began the class elaborating on the idea that executing a lead, response to a lead, or series of steps sloppily or in a way that disregards the basic structure of the dance - and then saying 'that's just my style' or 'I'm expressing myself' - just won't cut it. There are expectations that "this movement" leads to "that response". For the dance to work socially, on the milonga floor, it has to be that way. Within the few basic movements, forward, back, open - the entire dance is built with almost limitless possibilities.

They went on from there to having dancers connect with the steps and patterns with their entire body engaged - not just an emphasis on foot work - but also on posture, core strength, looking at the amount of space you physically take up in executing a step, and trying to be as compact as possible (for maintaining the most control.) From there they focus in on smaller and more specific areas of technique for boleos, giros, traspie etc.

Not all of the class time was fun.

My partner and I were having trouble with traspie/milonga steps and I asked for help. Oliver told us to demonstrate in the middle of room (in front of everyone of course). Before we could take more than 3 steps, Oliver shouted "stop!" He strode up, pointed to my hand on my partners shoulder and said:

At which point I wanted to curl up and die.

But I couldn't because we were still in the middle of the dance floor in front everyone. Oliver took my offending hand and placed it just to the side of my partner's should blade. He then told us again to demonstrate. While he was right, it was easier to feel my partner's lead - I was so nervous, I still couldn't follow even the most basic lead. So Oliver and Silvina split us up and danced with each of us for a few seconds. Of course I could follow Oliver a bit better because there was absolutely no hesitation in his lead - and he left no where else for me to go (honestly I was afraid not to follow him correctly for fear of being called out even more.) When we finished he told me that I could follow the steps with a more experience leader, but I was too hesitant when the lead was a little "softer" or more uncertain. In the absense of a very strong lead (which took away my options for other steps) I would shift weight without my partner out of anxiousness.

At that we returned to the circle with the other dancers. In that moment, I was certain of two things. I was never going to ask for help again and I wasn't going to dance another step (with a partner) in the class. I was sure my partner hated me and would never want to dance with me again after embarassing him.

I sat down and sat out. So did my partner.

He got his nerve up before I did, and got back on the floor. I was fighting back tears.

Another dancer, one that I admired but hadn't danced with, came and asked me to dance. I declined. He chided me (very gently) for letting the experience sideline me and he asked me again to dance. This time I said yes. The first dance, I did ok - better than I had in the middle of the dance floor.

When the song ended, he asked if he could give me a small piece of advice, and I said yes, please. He told me that if I landed my steps more strongly, it would help the leader know that I was where I was supposed to be so that he could continue the sequence. He asked me to trust myself. When the music started again, I landed the steps as though I knew I was doing exactly the right step. I was still rough, but I was getting it.

The moment of wanting to give up, passed. I was back in the game. When we finished dancing, I thanked my partner and told him if he hadn't persisted, I would have given up. I still don't think I can thank him enough. By the time the milonga came around that night - my spirits were greatly improved and I was dancing with everyone - even the partner I was sure would never dance with me again.


(Pictured at the top - the embrace that is not caca.)
Email ThisBlogThis!Share to TwitterShare to FacebookShare to Pinterest

Mari,
I'm so sorry you had this experience--in public, no less.
Sometimes in their enthusiasm to teach, instructors come on too strong in a negative way to get their point across.
I am so glad you had some positive reinforcement soon after.
Tango should be FUN--not an ordeal!
Besos from Buenos Aires!

Hi Mari,
Every time I take a tango workshop, I know that there is the possibility that I will be corrected in a way that I may not like it. And it happens all the time, especially when I ask for help. Sometimes even my advance followers abandon me. So I focus on learning the lesson and correcting my mistakes. As a beginner I developed bad habits that are hard to catch unless someone notices them and informs me. So I am open for criticism even if I don’t like it. But it is still hard to correct bad habits. Hopefully I’ll become better dancer after each workshop no matter how I feel at the moment.

Mari, everyone starts out making some caca mistake. Don't give up.

I have several women friends who have been in your predicament. Those who persevered became really good. The tables have turned. Some of those who first maligned them, now trip over themselves trying to get a dance.

Keep it up. Someday men will trip over themselves trying to get a dance with you.

Thank you everyone for your comments. I've gotten far more responses than I was expecting, mostly via email. Of course everyone has been so very supportive and my trampled ego healed within minutes of dancing at the milonga.

I should emphasize, because I'm not sure I did, Oliver was exactly right in his correction (in the content if not the delivery.) And I knew it not even a minute after he said it. Not only did I notice an immediate improvement in "reading the lead" - but I also noticed after reviewing loads of tango videos - that followers that I admired used the same (or very similar) embrace. The confusion, which I've heard from many other followers as well, lies in the fact that nearly every teacher and leader at the milonga prefers a slightly different embrace. I've had different teachers tell me a variety of hand placements. Only to be "adjusted" to other placements at the milonga. I thought maybe it was something I was just not understanding - some fundamental technique I was missing. If it is, then I now know aobut a dozen other followers who feel like they're missing it too.

If you believe the photo shows the proper embrace for tango, I suggest you visit Buenos Aires soon. You have no body contact. That's where the lead comes from.

IMHO Oliver's correction is caca. Watch videos of Ricardo Vidort or El Flaco Dany and see the way it should be done.

Well done for persisting. I've had similar experiences and it does really knock you but keep going. In the end you will be pleased!

Visiting Buenos Aires for tango is a kind of fetishism. BA is dead. Dead because for their tango self-piteousity, reincarnation of stardust which is gone over 10 years anyway and evolution-fobia. They learnt the world almost everything and now they are surprised there is nothing more to offer. :-)

I would have to agree with jantango, except that you don't have to visit Buenos Aires to find teachers who teach milonguero style or close embrace. Just make the drive down the road to Wimberley starting in September or October. (grin)

There is a dearth of close embrace in Austin (and most of the rest of Texas) from what I see, but then again, I don't get out much to dance any more.

Denver, Portland, San Diego...there you will find it...

In the meantime...hmmm...I'm not sure...but I do know this....close embrace tango is where it's at...all else is just pretending to tango...

Also, note that I've added you to my blogroll...so for being tardy in doing that...

Comfort yourself with the fact that no-one will remember it was you, but everyone will remember he did that to someone. And there was no reason why he could not have done what a gentlemanly or professional person would have done in that situation; corrected you kindly and then demonstrated the correction to the whole class.

Thank you again everyone for your encouragement. I'm back in the saddle (hmmm.. tango and saddles.. not the best metaphor, is it?) with my second workshop/intensive this morning at GoDance Studio with Daniela Arcuri. Still nervous, but it will be totally worth going, I'm sure.

Mari,
I had a horrible lesson (at least it was private) with a famous, and notoriously mean milonguera. She was really abusive. I learned more in that lesson than in everything else put together, even though you could not pay me to ever take a lesson from her again!
An Argentine friend told me that there is a different culture around educational "techniques" that is not acceptable anymore. I sure sympathize, especially since it was in a class. Yikes. Good for you for staying with it.
E

Your post made me laugh! Of course if I had been the room at the time I would have cringed.

I danced ballet for 10 years and heard variations of "CACA" so many times I can't even count them... Totally immune to it! The path of the enligthned one is tough (or at least of the milonguera).

I change my embrace sometimes 5 or 6 times during the same milonga. This guy I know he likes my arm on his shoulder. This other one wants me totally light and free and barely touching him. This other one yet wants me to hold him tight with my hand on his bicep, that one prefers when my arm is down almost to his waist... You try to adapt.

I got a good advice on embrace from a seasoned dancer: hold your arms as you would a load of laundry or a small child. From another teacher: just mirror how the man holds you at all times.

Take some, leave some. Whatever.... we dance to express ourselves, who we are, not to become pale imitations of so and so. Men will enjoy dancing with us for that and not because this movement or this embrace is "correct".

Elizabeth and Stephanie - I only just saw your comments. Thank you so much for your encouraging words - 2 more workshops and a private lesson later, I'm getting a bit tougher. :)